Dr. Ellinas has qualified from the Medical School of Aristotle University of Thessaloniki, Greece and has completed the first part of his Specialty Training in Cyprus under the Greek Surgical Training Programme in Otorhinolaryngology – Head and Neck Surgery.

What are the Paranasal Sinuses?

There are four pairs of sinuses at each side of our head that assist the control of temperature and humidity of the air reaching the lungs. Sinuses begin as pea-sized pouches in the newborn extending outward from the inside of the nose to the bones of the face and skull. They expand and grow throughout childhood and into young adulthood. Eventually they become air pockets or cavities that are lined with the same kind of lining that lines the nose. They are connected to the inside of the nose through smaller openings called ostia.

Normally the nose and sinuses produce around 750ml of mucus secretions per day. These secretions pass backwards through the nose picking up dust particles, bacteria and other pollutants along the way. This mucus is swept into the back of the throat by millions of tiny hairlike structures called cilia, which line the nasal cavity. The mucus moves into the throat and is swallowed. Most people do not notice this mucus flow because it is a normal bodily function.

Acute sinusitis gives rise to severe symptoms but is usually short-lived. Acute sinusitis usually occurs following a cold. Typically a green-yellow nasal discharge occurs a week or more after the onset of the cold and this is associated with severe pain around the cheeks, eyes and/or forehead. This may be associated with swelling and a high fever along with toothache.

Chronic sinusitis is sinusitis that continues for many weeks. Chronic sinusitis may be caused by an acute sinus infection which fails to resolve or as a result of an underlying allergy affecting the lining membranes of the nose and sinuses. Common symptoms include nasal obstruction, nasal discharge, reduced sense of smell, facial pain and pressure.

It is worth noting that pain in the face may well be due to other causes such as tension headache, migraine, neuralgia and jaw dysfunction. The pain from sinusitis usually occurs as a result of blockage of the sinus opening. These blockages may be caused by infections, irritants, allergies or a structural abnormality.

INFECTION
Most adults will get colds and upper respiratory tract infections up to three times a year. Children get them more frequently. Bacterial infections often follow the common cold. When the mucus changes from clear to yellow or green it usually means a bacteria infection has developed. Both viral and bacterial infections cause swelling of the tissues inside the nose and thickening of the normal mucus. This slows down or even stops proper sinus drainage and infection in the sinus may ensue.

IRRITANTS
Air pollution, smoke and chemical irritants, for example some sprays containing pesticides, disinfectants and household detergents, may cause swelling and blockage of the lining of the nose causing a narrowing of the drainage opening from the sinuses. This can once again lead to impairment of sinus drainage and consequent infection.

ALLERGY
Allergies can cause inflammation inside the nose. Common symptoms of an allergic reaction include nasal stuffiness, runny nose, sneezing and itchy watery eyes. Chronic sinusitis is sometimes associated with asthma. Allergies are responsible for asthma in some patients and may also cause nasal stuffiness making the asthma more difficult to control.

STRUCTURAL PROBLEMS
Occasionally structural problems within the nasal cavity can cause a narrowing. Some of these can be caused as a result of trauma while others may develop during the growth period. Occasionally the structural narrowing can be so severe that mucus builds up behind these areas of blockage giving rise to sinus infection.

Chronic Sinusitis may need long term treatment. Medical treatment options include long term antibiotics, nasal decongestants and nasal steroid sprays in order to reduce the swelling of the lining of the nose and sinuses. Antihistamines will have a place in patients who have an underlying allergy. In a majority of cases sinusitis can be managed effectively with medical treatment.

Occasionally symptoms will persist despite ongoing use of medicines in which case surgery may be necessary. 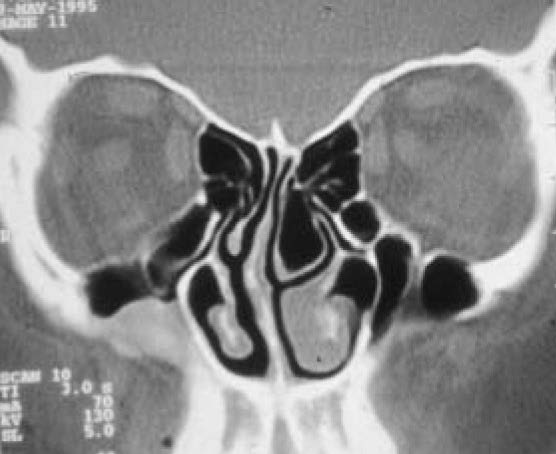 Surgery is usually considered when medical treatment fails and the patient’s quality of life has been decreased. A CT Sinus scan will show the extend of the disease and assist with planning and performing the operation in a safe manner.

The operation is performed with cameras/ endoscopes through the patients nostril, without the need of any external skin incisions. It is usually a day-case operation, which means the patient usually goes home at the same day.

The Diagnosis of Sinusitis depends on your symptoms and the findings of your examination. The examination will most likely involve the use of a nasal endoscope  / camera which Dr Ellinas will probably use to examine the lining of the nose and the opening of your sinuses.

If indicated, a scan of your sinuses might be requested.